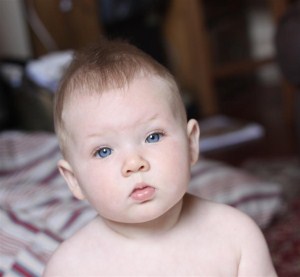 Hello to you all.

Some of you reading this may remember that on my last few Baby Yoga courses I was pregnant, well now Ruby is 8 months old and is a beautiful, smiley, bright bundle of energy.  Baby yoga was something that I was so excited about doing with Ruby.   Before I started any yoga with Ruby I followed the Touch-Learn’s programme and used the lovely Pocket Book of Baby Massage, co-written by Anita Epple & Pauline Carpenter.  I found it to be fantastic, as it is suggested, in helping Ruby to get used to positive touch.

I must admit that I had very high expectations of baby yoga for my own baby ... this may have been due to my very compliant demo doll ‘Bernard’ and Bernard loved the entire sequence and never did display ANY no cues!  I officially started the baby yoga with Ruby when she was about 3 months old – this was an age that really suited me as prior to this she was feeding up to 12 times a day and trying to find a time that wouldn’t adversely affect her digestive system seemed impossible.

Elements I loved and will treasure forever...

The way she focused on me; the eye-to-eye contact was beautiful.

It made me see just how much she loved her hands in her mouth, so poses like ‘Little Bird’ and ‘Loving Hug’ almost always had to be missed out.

The confidence it gave me in handling her was amazing, especially poses such as ‘Tick Tock’, ‘Roly Poly’ and ‘See Saw’.

The first time I heard Ruby laugh was during baby yoga – leaping lions, with Daddy pulling a silly face as I lifted her up. This was a moment her Dad and I shall never forget; in fact Leaping Lions went on for a good while as we didn’t want her to stop laughing!

The fact that ‘Wind the Bobbin’ ended up being a sing-song with Ruby watching ME doing the actions as she would not un-clamp her arms from her side.  BUT it still makes her smile at 8 months and we do it with her sitting up as she is too busy rolling off and crawling now to stay still for long!

It was time for “us” – play time for her and for me.  It helped me to understand her more. I saw her non-verbal cues in action, which helped enormously in other situations.

The skin-to-skin contact helped so much with bonding with Ruby - again, this was so, so important for me as Ruby spent her first week in the Neo-Natal Unit so contact was unbelievably limited in comparison to mums who are lucky enough to go home with their first baby.

For me, it didn’t always have to be a set-out routine – there have been many times when I chose her favourite poses and we repeated them and sung alongside the movements.

I am really fortunate to have these skills to introduce Ruby to yoga and I love that it can be picked up again at any point that suits her, even now (when she is actually still) she still giggles during Marching and Kangaroo Hop and Leaping Lions happens every day!

This email address is being protected from spambots. You need JavaScript enabled to view it.