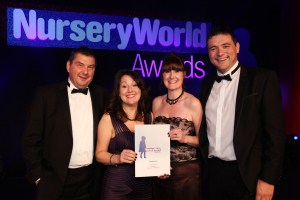 Trainer of the Year Award

Anita Epple was delighted to have been nominated, short-listed and then on the night become a finalist for the coveted award of Trainer of the Year.  A delegation of four attended the prestigious event in Lancaster Gate in London last month and it was a truly enjoyable evening celebrating the very best organisations, teams, individuals, initiatives and resources in the UK.  Editor, Liz Roberts's opening address was very moving and she talked of shining a light on the hard work, innovation and dedication of those in early years education and childcare, illustrating best practice and raising the profile of early years.  This certainly brought a lump to Anita's throat who has strived for excellence.

Anita said "I was absolutely thrilled to have been nominated for the award, but to then be short-listed was such a wonderful surprise.  I can't thank my colleagues and current and past students enough for the wonderful testimonials that supported my nomination and generally the lovely wishes of support from so many.  I came away from the evening as a finalist and I can assure you I was in extremely good company and proud to have taken part in such an event."

This email address is being protected from spambots. You need JavaScript enabled to view it.